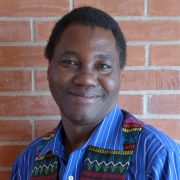 Our supply pastor, the Rev. Jacob Kanake, has been a member of the Falcon Heights Church congregation for the past 12 years. He has served on the Executive Board and on several ministry teams, and this month he was a delegate to the United Church of Christ General Synod.

But his story begins in Kenya, where as a youth he was already active in church leadership and felt a strong call into the ordained ministry. His parents initially discouraged him because of the poor pay for ministers. But in he writes: “I would say the call is bigger than what one does for a living; for me, my call defines the God’s intention for my life. The way I talk and interact with others ought to promote that call. Church ministry has its challenges but God promises to be with me; what is impossible to humans is possible with God.”

Rev. Kanake was ordained in the Methodist Church in Kenya. After completing his theological education, he was stationed in Methodist circuit parishes, and established six new churches as well. He also held several senior positions in the synod, and his superiors began grooming him for higher leadership. He came to the United States in 2001 for further study to enhance his leadership skills, intending to return to Kenya to serve the church there.

But “my life has transformed from one thing to another,” he said, and he believes God has now called him to serve in America. Rev. Kanake went on to earn advanced degrees at Pittsburgh Theological Seminary in Pennsylvania and Asbury Seminary in Kentucky, and he completed his doctorate in pastoral care and counseling at Luther Seminary in 2014.

Rev. Kanake is also a pastoral counselor who has worked in chaplaincy for the past 10 years, including at the University of Minnesota Medical Center and currently at Oak Meadows Senior Living. He worked in clinical care to acquire advanced skills to assist Christians with mental illness and families affected by alcoholic and drugs. He has been a longtime volunteer in many settings, including service as a Certified Emergency Community Responder for the cities of Lauderdale and Falcon Heights.

As supply pastor, he writes, “I pray to move the current church energy forward and prepare the church for a seamless transition.…I believe we have developed a significant uniqueness about who we are, in our mission, vision and values at least internally. We are an open church. We are an empowering church. I sense we sincerely like each other and want the best for each other and for the church.”

He adds: “Knowing that we could do so much better in many ways, also draws me to this church. I think this can be done even with continued growth. I am attracted to how we can become even better than we are now. With the mission and vision we have, there is great hope!”