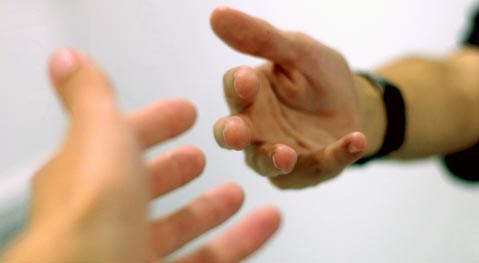 Two members of my previous congregation who lived across the road from each other picked a fight over a chicken’s destruction of a corn crop. The chicken of neighbor A wandered in the field of neighbor B. She called neighbor A to ask her to restrain her chicken from destroying her corn crops. Neighbor B did not act. Neighbor A was annoyed and called aloud to her neighbor and a fight started. They argued for a long time until neighbor B was visibly agitated, and when she was crossing the road to grab neighbor A by the neck, an oncoming car came and killed her instantly. The story of grief reached my office and upon investigation, both neighbors had other grudges that were triggered by the chicken incident. Neighbor B died without a possibility of being reconciled to the surviving neighbor A. This case is a reminder that reconciliation should not be delayed. When Christians in the same congregation disagree, they can easily affect others.

In previous weeks, we encountered Jesus revealing his identity; Jesus laying the foundation of his ministry, calling disciples and giving them lessons on doing ministry; and the disciples in the field doing the ministry. In Chapter 18, Jesus turns to teaching his disciples and all the future believers how to respond to personal injury caused by others. When the disciples heard Jesus was about to die (Matthew 16:21), they began to be caught in power struggles. Jesus knew a disagreement was about to occur amongst the disciples and they needed to know how to deal with it. Though there was an old Jewish way of dealing with disagreements, a new way, a global way was deemed necessary.

The whole of Matthew 18 is devoted to innovative ways of solving disagreements among the believers in petty cases, business cases, political issues, economic cases, divorce, and death cases. In every case, Jesus emphasizes that those in disagreements should exercise faith through love. Sometimes hard love! In today’s passage, Jesus moves on to teach the disciples/believers how to deal with disagreements and warns of the evils of power and pride (verses 1-4); Jesus commends the benefit of practicing humility.

The procedure Jesus lays down for dealing with disagreements (and offenses) is new; it cannot be compared with Jewish, American or African methods of dealing with disagreements. For instance, in the Jewish scripture, when people disagreed with the will of God they would die. When Korach disagreed with Moses (Numbers 16) the earth opened and he was swallowed with his assembly. The Jewish people of Moses’ time did not tolerate anyone who disagreed with what they perceived as God’s directives. With time, though, Jewish people moved from a death sentence to paying a fine. When disagreements/sins occurred, the offender would be pardoned after paying a fine (Leviticus 16:8-11). And during the intertestamental period (600 BCE to first century AD), the Jewish people amassed 613 laws and breaking any of them (sinning) attracted various consequences (death in heaven, lashes, and minor punishments). An offender had seven pardons for unintentional offenses; more than seven offenses/disagreements were not tolerated (Matthew 18:21). Jesus summarized all these Jewish laws into two: Love God and love your neighbor as yourself (Romans 13:8-10).

Therefore, Jesus wanted to set a new procedure that a loving believer should tolerate offenses seventy times seven (77×7) times in a lifetime. Jesus is building a new case for the disciples and all believers to handle offenses or disagreements. Whereas the Jewish people at first killed the offender, they later made laws to isolate the offender by making an offender an outcast. Jesus teaches in the new method that the offender also needs pastoral attention. The new process should be mutual, not one-sided—protecting the offender only but extending mercy to both the offender and the offended!

When disciples disagreed among themselves on who was closer to Jesus than others, the person who might inherit Jesus’ authority and leadership after his death, Peter courageously went and posed the question to Jesus, “Who is greater among us?” Peter was indirectly asking Jesus, “Who is your favorite? Who are you grooming for leadership among us?” Perhaps the disciples wanted to know if Jesus wanted their opinion. Jesus deflects the question on leadership and power and directs his answer toward resolution of disagreements. Jesus told them whoever humbles himself like a child will inherit the kingdom of heaven. But wait a minute, they are asking about earthly life and he is talking about heavenly life! How can one balance both life spheres: living faithfully and graciously on earth and finally living a more full life in heaven? How can one hold both lives in balance, because human tendencies are toward disagreements due to a desire to control and to own others?

Jesus goes further to instruct the disciples to refrain from offending others, especially the weak, the minority and the marginalized (verses 6-7). Jesus asks the disciples to be self-controlled when dealing with self-offenses and self—wrongs to be forgiven (verses 8-9). Furthermore, Jesus taught disciples/believers about practicing heart-felt love toward all believers and all people, including “these little ones” (verses 10-14) and not hurting them with evil plans.

Jesus CAUTIONED the disciples/believers against fighting for power, fame and recognition and instead Jesus implores them to command humility, to commend humility for themselves and for other people. From generation to generation, humility is a lesson hardly learned, yet it is the most vital lesson needed in life. Jesus used children to explain that humility enables the learner to have a new frame of mind and new insights for self and for benefit of others in Christ’s mission. Humility endows those lost in pride and fame to repent/heal, to modify and to reform their lives when they get filled with grace and a sense of caring for the weak. They soak in a deep need for mutual fellowship and they fully come back into themselves. One example of a reformed life is Saul of Tarsus, who became St. Paul; God facilitated his ministry and he became an influential spiritual teacher.

According to Jesus, one way of practicing humility is caring for all believers irrespective of their status. Jesus insists that those among us unable to provide for themselves need greater attention. The homeless, the disabled, the elderly and foreigners are part of what today can be referred as the “little ones.” The people who stand for equality, kindness and love for all get God’s blessings because “[their] father in heaven”—God—is glad of what they have done.

The above qualities and actions should guide the believers as they seek to restore themselves and others back to fellowship. Those to be restored may have withdrawn themselves from the fellowship or certain circumstances made them withdraw. The responsibility of searching for those who withdraw is placed on the community of faith. During the restoration aspect, the restorer ought to be aware not to allow their impulse to lead them into judging others. Instead of blaming and accusing the lost, they should exercise brotherly correction, necessary as it will be (Matthew18:15-20).

In this passage Christ cautions disciples/believers not to be stumbling blocks to those willing to remain in the fellowship. And in this reading, Christ advises the believers who are clothed with humility and a buffer of grace to confront those who offend them with the powerful desire for reconciliation and not being a stumbling block to them.

Jesus lays down a unique way of dealing with grave issues among the believers. Jesus is aware of secular methods (courts of law) of dealing with offenses, but instead of using the legal apparatus that most church discipline uses, Christ encourages mutual fellowship and pastoral nature where there are disagreements. If churches and individual Christians practice Christ’s teaching, they would be warned of turning to the secular legal apparatus as a means of getting rid of a disagreement or one causing it. Our Falcon Heights church bylaws make it clear that members hold one another in covenant and God’s spirit teaches each member the best way to interpret scripture for Christian growth. Ours is a covenant that we will walk and grow and get transformed together in Christian love. We anticipate each of us listens to God’s spirit for advice. When disagreements occur, we are covenanted to correct each other on time by exercising hard love.

We have many reconciliation methods today, including the secular court mediators or specialized therapists, according to our needs. These methods can be expensive to access and only informed people know where to get the services. We are aware of murder cases where couples, siblings or children and neighbors gun each other down instead of seeking mediation from their church, a court or a therapist. I know the majority of Christians also seek out their pastors or fellowship members to reconcile them when they disagree. I would encourage the Jesus way of mediation and reconciliation; it is easy to access and use either individually or from other believers. I encourage believers to trust other believers and seek their assistance with marital issues, business issues, and personal life crises that lead to self-denial of one’s situation. Welcome to my office and let us pray and evaluate your situation and agree how to solve the situation. I have relied on others and have given time to others in need of individual or family reconciliation.

A Christian believer who is offended even at home or at work is advised not to threaten another person with legal consequences unless one’s pastoral ways of solving the problem are gravely exhausted. When mutual humility is in practice, a desire to control others is minimized and unlimited forgiveness becomes the ideal way of love.

When dealing with disagreements, the question of power should be put at the center of the discussion of “who is greater.” Jesus says both the offender and the offended and the reconcilers should exercise humility in dealing with any disagreement/offense. That way, a disagreement is isolated from both the offender and the offended and handled as an external force that need to be corrected. When disagreements are solved the Christian way, God assures the two believers in agreement to pray and their prayers will be answered. When they also gather in fellowship, Jesus is there among them.