Our Chancel Choir will present Christmas selections from Handel’s “Messiah” during 10:30 a.m. worship 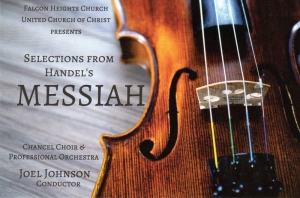 Joel Johnson will conduct the 52-voice choir and a professional orchestra accompanying the chorus. The performance is free and open to the public. Bring a friend and share the joy of music at Falcon Heights Church! Space is limited, so come early. We will provide early-grade child care and activities in the Gathering Room and preschool care in the Nursery.

The backstory of “Messiah”

“Messiah” has been performed in all sorts of forms and arrangements, both the Christmas portion and the Easter portion. But what’s even more inspiring is the backstory of how Handel came to compose it, and what was going on in his life at the time. (Credit to the version told by Biblical scholar Ben Witherington of Asbury Theological Seminary in Kentucky.) 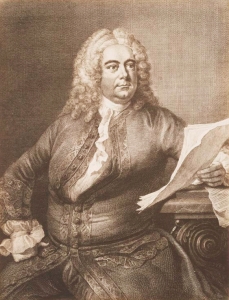 In the early 18th century, battles raged in the church over “sacred” and “secular” music. Discouraged by the situation in Italy, Handel moved to Germany and then to England in 1712.

By 1727, he had become a naturalized British citizen and had an up-and-down relationship with King George. This, along with his less-than-stellar business acumen, landed him on the financial rocks several times during his career composing and producing operas.

He had a stroke at 52 in the spring of 1737, which paralyzed his dominant right arm and blurred his vision. He could no longer perform as a keyboardist or conductor. In 1740, he got out of the opera business, depressed and deep in debt.

Shortly thereafter, he received a libretto of lyrics composed by Charles Jennens. It consisted entirely of portions of Scripture, mostly the Old Testament. It spoke so deeply to Handel that he decided he had to compose an oratorio based on the libretto. There are lots of versions of “Messiah’s” composition story, but all of them agree that he composed it in a very short period during the summer of 1741. He seems to have had a mystical experience when he came to the “Hallelujah” chorus.

That chorus actually is the conclusion of the second (Easter) part of “Messiah.” But it usually concludes performances of the Christmas portion of the oratorio’s first part, as we will hear it on Dec. 9.

When it premiered during Easter 1742, Methodist founder John Wesley was among the first to hear it. H was unimpressed: “There were some parts that were affecting, but I doubt it has staying power,” he was heard to say.

While “Messiah” was not an instant success, it quickly became very popular and was soon seen as a classic. And throughout the rest of his life, Handel kept modifying it to suit the needs of the singers and instrumentalists he was working with. He never foresaw it becoming the most-performed classical work of all time.