Paper peace cranes that have flown in other communities torn by violence will be on display this Sunday only, July 24, in the sanctuary of 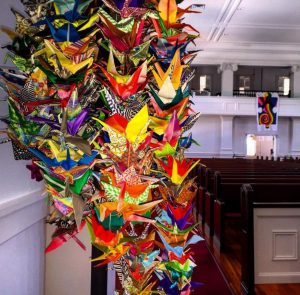 Falcon Heights Church. In a nationwide “migration for peace,” the cranes have traveled to United Church of Christ churches across the country as a gesture of shared grief, love and healing following high-profile shootings and other acts of violence.

The cranes will be here in acknowledgement of the shooting death of Philando Castile on July 6. We received the cranes from Central St. Matthews UCC in New Orleans, where they were displayed following the death of Alton Sterling in Baton Rouge. (As that congregation concluded last Sunday’s worship service, they learned of three more shooting deaths, of three police officers in Baton Rouge.) From Falcon Heights, the cranes will be sent to Cathedral of Hope UCC in Dallas, where five police officers were killed.

The peace cranes tradition began in 2011 at Saron UCC in Sheboygan Falls, Wisconsin, marking the 10th anniversary of the 9/11 attacks. Other places the cranes have hung include: